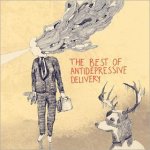 The Best of Antidepressive Delivery (which is not actually a “best of” compilation, but a collection of six new tracks) was my first exposure to this oddly named band from Norway, and I’m quite impressed.

The band combines styles similar in ways to Spock’s Beard as well as some other Progressive bands such as Echolyn, even Pink Floyd on one or two tracks, adds a touch of jazzy passages similar to Steely Dan—including some scat-like vocals on the track “Goodbye,” or background sax arrangements on the track “True Love”—and comes up with a sound that is somewhat unique, or at least to my ears.

The lead vocalist is above average and also somewhat unique for this genre of music…his voice doesn’t overwhelm, and his tone and phrasing adds to the style of each track in a chameleon-like fashion, while the background vocal harmonies are spot-on.

The musicians are also quite diverse, being able to play many styles with ease. Although each track has intricate arrangements, some featuring both electric and acoustic passages, the songs are nevertheless quite melodic. My favorite track is the nearly fourteen-minute closer “Alive,” which combines several different moods, fully utilizing both electric and acoustic instruments, and contains terrific vocals and musicianship.

The bottom line…I found this to be a top-quality effort! I’m also shocked to see lower ratings for this album on various music-related websites—truly nonsensical—but I can definitely recommend Anti-Depressive Delivery to fans of Progressive Rock looking for a band that doesn’t quite fit neatly into the genre forged by others, but adds to the genre’s overall diversity.