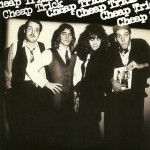 Ah, yes, this is THE Cheap Trick, the band my friends and I saw at local Chicago clubs like Haymakers, B’ginnings, and The Thirsty Whale. THE Cheap Trick that blew everyone’s socks off with their dirty, sloppy, loud, and fiery brand of metal pop. THE Cheap Trick that had such promise! From the bullsh*t liner notes of the band’s history (total fiction, hence the name of the band), to the in-your-face production, to the two “Side Ones” on the back cover, to Robin Zander’s shrieks intermixed with his unique and melodic vocal style, this is THE band that had the Chicago clubs packed night after night.

The extraordinarily ultra-nasty guitar tones, the bombastic rhythm section and (generally) sinister lead vocals—in other words, the overall “sleazy and punky and drastic and dastardly” Rock ‘N’ Roll rebellious sounds—are raucously exemplified on head-banging tracks such as “Daddy Should Have Stayed In High School” or “Taxman” or “Hot Love” or “Elo Kiddies” or “He’s A Whore” or the deranged “The Ballad of T.V. Violence,” whereas the pop-rock sensibility of future Cheap Trick albums still shines through on songs such as “Oh, Candy” and “Mandocello” and also the aforementioned “Taxman” and “He’s A Whore,” but with that overall mind-warped, slamming twist that leaves one feeling as if they needed both a spiritual cleansing along with an hour-long shower after experiencing the mental derangement. In other words, the band—at this point in its career—was a wonderful conglomeration of The Rolling Stones and The Beatles, Aerosmith, Badfinger, and Steppenwolf, and who-the-hell-knows-what-else “Rock Marriages” that were (sadly) never repeated on future Cheap Trick albums.

So, not a below average track amongst the batch. A true classic. Such a shame this is the one and only release that actually captured THE real Cheap Trick before it dove head-first into the watered-down pop territory that brought it fame and fortune. Not to say the Cheap Trick album’s that followed should be written off entirely, but for those who want to know the real Cheap Trick, this is THE band and THE album!