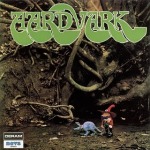 Aardvark was a one-album band from the U.K., and the band’s lone release is, in one respect, like an album by Emerson, Lake & Palmer (ie. a trio without a guitarist) where the Hammond organ (and on many occasions, the piano) is the lead instrument, but also with a Deep Purple-esque/Heavy Psych approach and atmosphere on numerous tracks.

Do I wish the band had produced more than a single album during its existence? Hell yeah! But does it keep me up at night in desperation because the band released only a single album back in 1970? Ah…hell, no.

Still, although I find nothing revolutionary or horribly exciting on offer here, the album is quite good nevertheless and a nice addition to my overall Prog-Rock music collection. So for Prog fans who want to snatch up anything even remotely “passably cool” related to the genre, you might want to investigate this obscure platter.