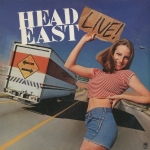 This is probably one of my all-time favorite live albums from the ’70s, ranking right up there alongside Made In Japan (Deep Purple) or Uriah Heep Live.

Head East, in its relatively short career, possessed one of the finest (and overlooked) rock vocalists in John Schlitt, while the rest of the band members held their own quite nicely, especially in the “background vocal” department.

Two things Head East did not possess, however, was the ability to write absolutely killer tracks (although the band hit the mark on several occasions—usually one or two songs per album—or selected some better than average cover tunes to record, while the remainder of the music proved nothing more than average fare).

The other deficiency that plagued the band’s career was horrific studio production, with many of the albums being truly lifeless and abysmal. Although the situation improved somewhat on the third platter Gettin’ Lucky and probably reached the high point on the fourth album Head East, no producer seemed capable of capturing the power of the band as it appeared on stage.

Head East toured the USA quite extensively. The group had the chops, the road experience, and certainly knew how to throw a massive party for its fans. Head East knew how to deliver the goods on stage night after night, and when the band was in tip-top form, it was unbeatable. Thankfully, Head East decided to issue a live album, showing the masses who tended to overlook the group what it could achieve given the right atmosphere.

Head East Live captures the band at the peak of its prowess, and it also contains seventeen tracks, probably the best songs of the group’s career—a live “greatest hits” package, if you will. Additionally, two of the best songs included never appeared on any of the studio albums, and deserve special mention. The kick-off track, Rick Springfield’s “Take A Hand,” allows the band to show from the start what exactly it could do. The track features the group’s trademark harmonies and allows John Schlitt’s voice to really shine, while the other non-studio-released track is a cover of the Beatles’ song “It’s For You.” This is the same song that Three Dog Night released on its debut album a decade earlier and made “its own” with the famous harmonies. Let me tell ya, though, that Head East’s performance of the song (basically a resurrected and slightly altered version of the Three Dog Night arrangement) is much better, more dynamic, the complicated harmonies flawless and the added benefit of a live atmosphere giving the track the production quality it deserves. The crowd absolutely loved Head East, and you can clearly hear the fans screaming their approval in the background.

Other album high points include the band’s best-known “hits,” the Russ Ballard-penned “Since You’ve Been Gone,” along with the ultimate party/sing-along song, “Never Been Any Reason (Save My Life)”. But the absolute best tracks on this collection are the bluesy ballad “Every Little Bit Of My Heart” and “Elijah,” which both demonstrate John Schlitt’s dynamic vocal abilities.

Newcomers to Head East who want to sample the band’s back catalogue should probably start with this album since it shows the group at the apex of its career.