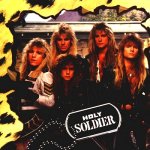 Although Holy Soldier never achieved the same amount of “fan base” and popularity (or press/hype) as other Christian bands such as Stryper, this early ’90’s “hair band” from Los Angeles proves with this debut that it had the same “Christian muscle” as its more acclaimed contemporaries. That’s not to say Holy Soldier sounds exactly like Stryper, but the music does fall into a similar style (unlike other Christian acts such as the more AOR-focused White Heart or Petra)—driving Hard Rock, for the most part, but without the sometimes overly sappy Stryper-esque balladry, and above-average musicianship, while the lyrical “holy message” is less blatant.

On the other hand, Stryper had a special “ace in the hole” in the form of powerhouse singer Michael Sweet, whereas Holy Soldier’s vocalist Steven Patrick (a talented chap in his own right) doesn’t possess the same forceful or (more importantly) recognizable set of pipes, which is probably one of the reasons why Stryper succeeded on a broader scale and Holy Soldier did not.

Nevertheless, Holy Soldier produced some decent Hard Rock and a touch of Metal on this debut, with its dual-guitar prowess, a slamming rhythm section, and a trace of a Glam-Metal attitude that occasionally reminds me of groups such as L.A. Guns or Vain, thanks primarily to the vocal delivery. Songs such as “When the Reign Comes Down,” “Cry Out for Love,” “We Are Young, We Are Strong,” “Tear Down the Walls,” and “Stranger” are catchy enough, not brilliant or in any way unique, but well-performed, appealing, and generally commendable. And thankfully, the band doesn’t try to shove the “God message” down anyone’s throat with every single sentence, so that’s an added plus.