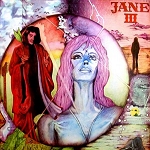 A HUGE step down from their first two albums. Instead of progressing from where they left off, they seem to be regressing. Their first album contained some interesting Hard Rock mixed with a touch of Progressive Rock, even though the songs were made up of mostly 3-chord patterns, nothing at all adventurous, but pleasant enough. Then the second album expanded their style a bit, added more variety when it came to the keyboard sounds, and the chord patterns became a tad more developed, the songs more structured and adventurous.

And then this? For pity’s sake, the opening track “Comin’ Again” is nothing more than nearly 10 minutes of the same two chords played over and over and over and over again. Boring!  This is not even close to Progressive Rock, as this album is labeled at different music-review websites, but instead the band comes off as a Hard Rock-ish “garage band” whose members seem to be just learning their instruments. Lame, boring, and scary how a band that at first showed promise and steady progression in their development could suddenly have regressed to the point where they come off as nothing more than amateurs, and untalented ones at that.

Thankfully the band bounced back with their next release. Meanwhile, this is one album to avoid, a glaring mistake, a jarring interlude in their otherwise decent catalogue of early releases.