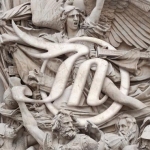 Although the music of Jono is usually labeled as “Rock Opera” on several music-review websites, that’s only partially true regarding the band’s sound. Instead, picture a combination of bands such as Savatage (Streets era) meets Queen (Sheer Heart Attack era), only without the overly grand background vocals and more AOR-ish when it comes to melodies, flirting with the band Avantasia. Add a touch of Jesus Christ Superstar and that’s similar to what Jono has to offer on this release.