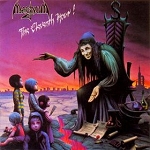 If you can look past the bland “produced in a closet” quality and savor the melodies and musical arrangements, all the better. Perhaps not as good as the previous Chase The Dragon album, especially in the quality of production, there are no songs with the strength of “Soldier of the Line” or “Sacred Hour,” the band still had genuine creativity, and it’s apparent here in spades. Additionally, considering that the following Magnum album, On A Storyteller’s Night, would be their unqualified masterpiece, the production on this album is (almost) forgiven, since the band is obviously moving toward their magnum opus, and the quality of the material here shows that.

By the way, Magnum’s album covers are usually way above average, and this cover is one of their best. Slightly misleading, certainly, since the band doesn’t play the type of Progressive Rock the cover might lead one to believe, but they have enough progressive elements in their music that the striking cover isn’t too far afield.