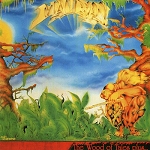 Can someone, anyone(!), please explain to me this horribly bizarre phenomena?…Italy is known to produce the most outstanding, pitch-perfect singers in the world when it comes to the genre of “opera,” yet in the genre of “Italian Progressive Rock,” the majority of the singers are outrageously untalented, warbling messes, many with odd, chilling vibratos, who can barely locate the correct notes to sing even in the clearest of circumstances. (Banco del Mutuo Soccorso is a perfect example of this cringe-worthiness.) Why??? How is this possible??? Please, someone, anyone(!), explain this to me!!!

Regardless of my feelings toward the vocalists of many Italian Progressive Rock bands, I chanced upon this release not too long ago and decided to risk a listen due to the praise-worthy reviews I read. Thankfully, the vocalist (although limited and shamelessly off-key on many of the vocal passages, as I’ve come to expect from bands in this genre) is at least tolerable (unlike most of the other bands from Italy…in other words, not vomit-inducing like Banco del Mutuo Soccorso). And the music, itself, is truly excellent–complicated and diverse, mellow at times, yet often exciting–reminding me of such acts as PFM (another Italian Prog-Rock band I can thankfully tolerate), Genesis, IQ, early Marillion, and more than a bit of Jethro Tull (thanks to the occasional flutes, played flawlessly).

So actually, after PFM (or perhaps Doracor), I put Malibran as probably my second or third favorite band amongst Italian Prog-Rock acts when it comes to holding my interest without making me wince because of the singer’s lack of abilities. And, since I’ve listened to the band’s later albums, where the vocalist does indeed improve as the years progress, I know at least that this band’s debut album is not a fluke…it’s actually an undiscovered gem in the genre, showing exactly what this band promises to achieve when it comes to instrumental chops and songwriting abilities that will guide them to future (and even better) releases.

Not perfect, but flawed indeed, yet showing terrific promise and still enjoyable overall for fans of the prog-rock genre.