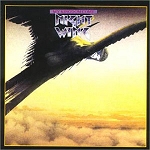 On My Kingdom Come, probably one of Nightwing’s finest, the band falls somewhere in the cloudy “gray area” between commercial (or AOR) Hard Rock and Progressive Rock. (For some reason Nightwing was always mislabeled with a “Heavy Metal” moniker—probably due to the era when the band emerged on the rock scene and started being featured in magazines such as Kerrang! and Metal Hammer.) Actually, Nightwing reminded me of a cross between the sadly overlooked Grand Prix (the Samurai album springs to mind) and the always-brilliant Magnum (circa the On a Storyteller’s Night masterpiece). The keyboards, supplied by a talented chap named Kenny Newton, dominate the proceedings only when needed, depending on the overall mood of the track, which is where a lot of the “gray area” of “commercial vs. progressive” appears. Since I’m a fan of both types of music, however, I found this merging of styles more than appealing.

Much of Nightwing’s commercial sound on this album is due to the lead vocals, supplied here by the excellent and shamefully ignored Max Bacon (formerly of another overlooked British band called Bronz, and who would leave Nightwing about a year later to front Steve Howe/Steve Hackett’s more renowned band GTR).

Standout tracks on this album include the trio of openers “Back On The Streets,” “Fingers In The Fire,” and the single “Night Of Mystery” (produced by Steve Hackett himself). The band have a harder edge on the B-side, where “The Devil Walks Behind You” and “Living Behind The Eight Ball” feature more guitar and allow Max Bacon to really belt. But the final two tracks, “Men Of War” and “My Kingdom Come,” are where Nightwing really shines, showing exactly what the band could achieve given the right mindset. The title track, especially, is where the wedding of commercial and progressive styles is at its most successful.

With the right promotion and radio airplay (especially in the States, where this band was generally “unheard-of”) Nightwing might have achieved some level of success outside of England and/or Europe in general. In this respect, the band also reminds me of Magnum (or all the aforementioned bands, if the truth be said, apart from perhaps GTR), who also failed—unfortunately—to “take America.”

My Kingdom Come is definitely worth a listen, especially if you can locate a cheap copy in a used record bin somewhere (which I did, even though it was labeled as “Export.”) It was well worth the five bucks I spent for it! It’s also a definite “must have” if you’re a fan of Max Bacon, which I am.