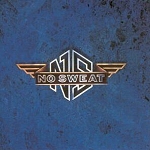 Back in 1990, a band called No Sweat burst out of Ireland with its sole album, a terrific collection of catchy AOR/Hard Rock material in the same vein as the group FM.

In truth, not only does the band have the same sound and style as FM displayed on its excellent Indiscreet and Tough It Out albums (which both popped up just prior to No Sweat’s debut), but No Sweat also had a singer (Paul Quinn) of the same high caliber as FM’s Steve Overland, although perhaps not quite as instantly recognizable when it came to his timbre and tone. Nevertheless, Quinn sings with strength, quality, and authority while the band of equally talented musicians drive through some memorable and polished tracks with a professionalism not often seen on debut albums.

The opener “Heart and Soul,” as well as numerous other upbeat and energetic rockers such as “Generation,” “On the Edge,” “Mover,” “Tear Down the Walls,” “Shake,” and “Lean on Me,” are all highly memorable, possessing the sort of melodies that stick in your head long throughout the day. Additionally, several other songs such as the acoustic-guitar enhanced “Waters Flow” and “Stay” seem almost a mixture of FM with Thunder or Little Angels, two other U.K. groups that popped up during the same era with their driving and engaging styles.

Therefore, No Sweat was one short-loved band that deserved at least some recognition, if not worldwide fame, but the band’s timing was (for some reason) ill-fated. Still, it’s a damned shame No Sweat didn’t release more material, especially since the group (based on this sole album) was obviously capable of creating impressive and unforgettable choruses. Instead, No Sweat disbanded shortly after the release of this ten-track collection of tunes, which ended up becoming one of my favorite AOR/Hard Rock releases from the early ’90s.