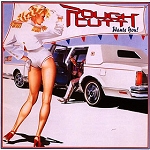 This band could have been HUGE! Great songs, great musicianship, hot management in the form of Wendy Dio (wife of Ronnie James himself), and perhaps one of rock’s greatest (and most overlooked) vocalists. Unfortunately, after Rough Cutt’s stunning debut album, which showed such promise, Rough Cutt Wants You, its sophomore effort, fell a bit short. And it’s not the band’s fault either, which makes it so darned frustrating. In truth, some of the songs on offer here surpassed the material on the debut album (a difficult task, since the debut was killer), while the musicians and the magnificent vocalist Paul Shortino (who possesses a David Coverdale-ish blues/soul quality when he hits the low notes, not to mention a talent for holding out a high-pitched rock ‘n’ roll scream that could peel the paint from the walls) did their level best to make the whole thing gel.

The problem with this release—without a doubt—falls smack dab in the lap of the producer, Jack Douglas. Whereas the debut album had a rich, full-bodied, slamming sound (giving you the impression it was recorded in a concert hall), this album sounds as if it was recorded in a padded basement, with little ambiance added to the drums, guitars, or (heaven forbid!) the vocals. It’s unfortunate the band couldn’t secure the services of Tom Allom again (the producer of the debut album) since he was obviously much better suited for this material. In my opinion, whether right or wrong, had Douglas given the production the proper care and not relied on his reputation as a seasoned professional (ie. it sounds like he “phoned in” his input), this album might have put Rough Cutt on the map, big time. It’s no wonder that Shortino abandoned ship shortly after this album’s unremarkable release to join Quiet Riot as a replacement for Kevin Dubrow (indeed, he put Dubrow to shame, by the way!).

Regardless of Douglas’s dropping the ball, however, the material on offer here is quite good. “Rock The USA” opens the album, a driving, kick-ass tune that reminds me of “Cutt Your Heart Out” (one of the stand-out tracks from the debut). This track also features one of Shortino’s amazing screams (how he held those rafter-punching notes for so long is anyone’s guess…chalk it up to tight underwear, is my best assumption). Next follows more melodic, yet still-rocking tunes: “Bad Reputation,” “Don’t Settle For Less,” and “Hot ‘n’ Heavy,” and the anthem-esque ballad “Take A Chance.” Side Two has more of the same heavy melodic rock, although it’s perhaps not quite as memorable, with the exception of the closing track, a gut-wrenching ballad entitled “The Night Cries Out (For You).” Nevertheless, it was apparent the band’s songwriting abilities were developing nicely, so the lack of proper production makes the situation all the sadder.