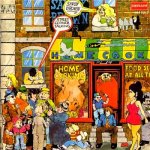 Okay, I confess, I love the “Dave Walker era” of this legendary British band. The trilogy of ’70s albums with Walker as the lead vocalist saw Savoy Brown at arguably its creative best, and Street Corner Talking is, in my opinion, the finest of the three collections, although the other two (Hellbound Train and Lion’s Share, both released the following year) aren’t very far behind.

Even after all these decades, I still savor everything on offer here, the seven tracks being highly memorable and as diverse as all the characters depicted on the fun cover art.

For instance, the tune “Let It Rock” seems almost like a hat-tip toward Tens Years After, while “Time Does Tell” first struck me as a cross between the original Fleetwood Mac and other legendary Blues acts of the era. And for those truly into the Blues-Rock scene from the early ’70s, the musicianship on the eleven-minute “All I Can Do” alone should be motivation enough to grab a copy of this album.

As for the other tunes, from the Country-Rock/Blues-Rock feel of “Tell Mama” and the (almost) Deep Purple-inspired “Street Corner Talking,” to the excellent renditions of The Temptations’s number-one hit “I Can’t Get Next To You” and Willie Dixon’s classic “Wang Dang Doodle,” Savoy Brown sounds highly cohesive and more than a tad energized and excited, not only about the top-notch material, but perhaps even its future as a band, likely due to the group’s fresh lineup of musicians. (For those who may not be aware of Savoy Brown’s history, after the previous year’s Looking In album, band leader/founder Kim Simmonds suddenly found himself “bandless” when the other musicians abandoned ship to form Foghat. Tough times indeed. But, I guess it’s only rock and roll, right?)

Anyway, the sudden departure of the previous musicians truly proved a blessing in disguise for Savoy Brown since Simmonds managed to recruit a crack team of new playmates for Street Corner Talking, and to me, the group never sounded better in its lengthy history. Throughout each track, his guitar solos are both emotive and melodic, the rhythm team of bassist Andy Sylvester and drummer Dave Bidwell is wonderfully tight and versatile, while Paul Raymond’s contributions on organ, piano, and electric piano added a perfect addition to the album’s driving sound and atmosphere (similar in the way his hooking up with UFO in future years would add spice to that band’s sound). And all the while, vocalist Dave Walker is at his beautifully gruff and gritty best. I just wish this terrific quintet had continued on for many additional years, since these musicians truly gelled and produced some exceptional material in the process, becoming a classic lineup in every sense of the term.