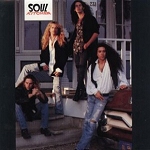 Although this lone Soul Kitchen album was released in the early ’90s, it would have fit in nicely with the music scene twenty years earlier.

To me, the band, with its mix of straight-ahead Hard Rock and Blues Rock, and even a touch of both Southern Rock and Soul (no shock, considering the group’s name), carried on the torch left by bands such as Humble Pie. Indeed, the vocalist Jeff Wilson has a similar raspy, belt-out-the-blues quality to his voice as the legendary Steve Marriott, and when the occasional female gospel-like background vocalists kick into high gear on a few tracks, the “Humble Pie during its heyday of Smokin’ or Rockin’ The Fillmore” comparison is complete.

Most of the songs on this album are catchy enough and the band doesn’t stray too far from its comfort zone, which the musicians seem to have down pat. Therefore, this album is certainly worth a listen for those who miss the guitar-driven Hard Rock/Blues Rock bands of the early 1970s. Too bad this talented Los Angeles group didn’t last long enough to create a second album since I would have loved to see the band develop further.