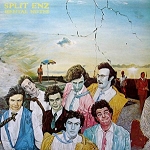 For years I had avoided investigating this New Zealand band, and for only one reason—the weird image really turned me off. I was never a fan of quirky, costume-wearing acts such as Devo, considering them all one-hit wonders of the ever-trendy and often-silly Pop world, and I always categorized Split Enz among groups of that nature. New Wave Pop garbage, is what I’d always assumed, a style of music I could never come to embrace.

But what’s the old adage about never judging a book by its cover?

Anyway, after several decades, I eventually ran across recommendations for the band’s debut album, with several people claiming Split Enz wasn’t anything like Devo (the goofy image aside), but instead was a band that played music (at least on this album) more akin to a blending of Prog-Rock outfits such as Genesis, Kayak, or Camel with eclectic Art-Rock acts such as The Tubes, Brian Eno, and Sparks, creating a sort of Pop-Art-Prog-Rock genre. And, darn it, after finally giving this album a chance, I concluded that the above description is exactly what the band turned out to be.

For certain, Mental Notes contains some odd vocals at times that will likely not appeal to everyone, but the wonderfully twisted melodies and complex instrumental passages really do make this album something quite special. I can’t actually compare the group to any specific band, that’s how unique its overall style. Sure, on tracks such as “Spellbound,” “Stranger Than Fiction,” “Walking Down a Road,” “Maybe,” and “Under the Wheel” I can detect traces of all the acts I mentioned above, but I truly can’t recall any other band that has Split Enz’s particular balance of influences within its music, or a group that mixes them up in an occasionally theatrical or whimsical fashion like this.

Therefore, I ended up giving Mental Notes 4.5 Stars due to the band’s special (and successful) marriage of styles, plus the flavor of tongue-in-cheek wackiness, which somehow made a unique genre all its own. I’m unsure whether the group continued with this sound/style on further releases, but seeing how the band’s image (its costumes, etc.) seemed to change throughout the ’70s and into the ’80s, I’m assuming the music also fluctuated and evolved with the times. Maybe one of these days, if adventurous, I’ll investigate further.