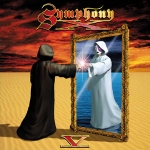 This album, from start to finish, ranks right up there with classic Prog-Rock-Band “must have” albums such as Yes’s Close To The Edge, Gentle Giant’s In A Glass House, ELP’s Brain Salad Surgery, and Genesis’s Foxtrot releases, albeit a much more “modern” and heavier version of classical-influenced rock (very similar, in parts, to Dream Theater and Kansas and Yngwie Malmsteen) yet killer in every bloody department.

Since the band’s second album, Symphony X has NEVER produced a bad record, and, in my opinion, this is their benchmark for excellence. Either add it to your collection at the first possible opportunity or consider yourself a “wannabe” prog-rock/prog-metal fan 🙂