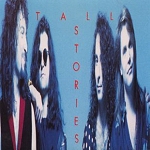 When I first heard the song “Wild On The Run” played on the radio back in 1991, I thought it was a new track from Journey (or at least Steve Perry, who at the time was supposedly working on a solo project). That’s how close the Tall Stories’s vocalist Steve Augeri sounds like Steve Perry at first hearing, and how close the music compares to a band such as Journey (although minus the keyboards). (No shock that Steve Augeri would join Journey nearly 10 years later.)

There’s nothing new here, nothing adventurous, yet what is included on this release is quality AOR or Hard Rock Pop, better than a lot of other bands in the early 90s attempting to find a niche among all the grunge acts popping up at every turn. Yes, Tall Stories has much more in common with 70s/80s acts such as the aforementioned Journey, Strangeways, or even Canada’s highly underrated (and overlooked) Teaze than it does to Pearl Jam, Soundgarden, or Nirvana, which is probably why this band made only one album before disappearing into oblivion.

The musical performances are top notch, the lead vocals and harmonies high caliber, and the songwriting is generally better than average. Most of the tracks are also memorable, so one has to wonder what might have happened to Tall Stories had they appeared on the scene about 10 years earlier. They might have enjoyed some level of success, but alas, their timing was very “off.”

Standout tracks have to include “Wild On The Run,” “Sister of Mercy,” the ballads “Crawling Back” and “Stay With Me,” and the mid-tempo “Somewhere She Waits.”