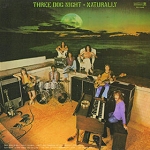 Now, it’s been several years since the band’s debut album, and by this time they definitely have their act together and now how to get “the most bang for the buck” when it comes to songs for album inclusion, production, marketing, etc. But despite the inclusion of a little ditty entitled “Joy To The World” (which ended up sounding like a kiddie-anthem and prophesied uglier things to come for the band’s image, sadly) this isn’t a shabby album.

At this time in their history, now covering songs by excellent bands such as Free, Spooky Tooth, and Traffic (and making them “their own”), Three Dog Night possessed a bit of a “hip factor” in the world of music. And listening to this album today, I can see why.

Although always leaning toward the “pop end” of music, the band could still include songs like “Liar” (by Argent), for example, which even today has a certain power, an interesting atmosphere, and truly denigrates the original Argent version. I recall how once (I believe it was Rolling Stone Magazine) compared Three Dog Night to, of all bands, Grand Funk Railroad. As a 10-12 year old during the band’s heyday, I never really “got” the comparison. But now in retrospect, I finally see the huge similarity…the organ and guitar tones, for example, while the voice of Chuck Negron wasn’t that “dissimilar” to the voice of Mark Farner. Regardless, this is one of their better efforts, apart from the aforementioned “Joy” track.

The trade-off/dual lead vocals are flawlessly performed, as in “I Can Hear You Calling,” “Heavy Church,” or “One Man Band,” the arrangements were pretty decent overall, and the musicianship was well above average. Also, the Spooky Tooth cover of “I’ve Got Enough Heartache” is also certainly better than the original version from the album Spooky Two, and a track in which the gospel-inspired and gritty vocals of Cory Wells shines while the background vocals/harmonies from the other guys are near perfect.

Anyway, definitely not a bad place to start for anyone seeking to delve into Three Dog Night’s history.