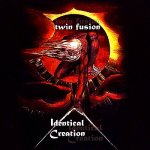 Back in 2008, Twin Fusion released its one and only album, which occasionally reminds me of the band Lucifer’s Friend, only without the predominant keyboards/Hammond organ. The main lead vocalist even has a similar tonal quality and style of the magnificent John Lawton (of Lucifer’s Friend and Uriah Heep fame) on a few of the earlier tracks (“Off We Go Alone” and “Treasures Of Mind,” for instance), although perhaps not the same power when he’s going for the high notes.

Still, Lucifer’s Friend springs to mind when listening to many of the tracks on offer here. Early Uriah Heep influences pop up on other tracks (“He Drinks His Wine” and “Rock ‘n’ Your Soul,” as examples). Had the band included a full time keyboard player (perhaps it did, since you can occasionally hear touches of piano and various keys on a few tracks, but generally they are so buried in the mix that they may as well have not been included), then the comparisons would have been even more obvious.

So in general, the band’s overall style has a lot of ’70s’ influence with modern-day Progressive Metal tossed in for good measure. I might have given this album a higher rating were it not for several average tracks near the end (“Celtic Passage,” where the most glaring keyboard passage on the album is rather cheesy, and it sounds like the main lead vocalist is sharing duties with another less-accurate singer—the same thing on the track “Olympus Mons”). The production quality could also use improvement. But generally, this isn’t too bad, especially if you’re into the metal sound from the ’70s (and enjoy bands as diverse as Lucifer’s Friend).

I’m unsure if Twin Fusion is still together, but I certainly wouldn’t mind hearing more from the band, especially if it continued to develop its sound (and get better production). Twin Fusion definitely had the potential and talent to grow.