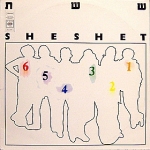 Sheshet was an interesting band from Israel that produced only (shamefully) a single album back in 1977, which was reissued in 2008 with “Bonus” material included. Featuring both female and male vocals, all singing in Hebrew (I’m assuming) and with complicated, interweaving harmonies, the band created outstanding jazz-inspired Progressive Rock on its lone album. Especially enjoyable are the extended flute excursions on various tracks along with the occasional reed instrument, violin/fiddle, and the addition of extra percussion instruments sprinkled throughout, which gives added dimension and sophistication to the sound.

I hear a bit of Gentle Giant and Jethro Tull (thanks, obviously, to the flute), as well as a touch of Caravan and Camel in Sheshet’s overall sound, along with a smattering of influences from Jazz-Rock/Fusion bands such as Return To Forever and Weather Report. The keyboardist (notable for the heavy use of jazzy piano) is also worth mentioning as well as the band’s rhythm section, which seems to have quite a lot of fun tossing in shifting rhythms and odd time signatures.

For Prog-Rock fans, this is an impressive release…a lost and forgotten gem.