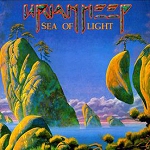 When Bernie Shaw joined Uriah Heep for the Raging Silence album, I somewhat liked his voice, yet I felt his overall influence yanked the band down several pegs in quality, especially after the generally decent “Peter Goalby-era” of the band’s career.  This opinion carried on with the Different World album, which proved even more deplorable and lackluster.  I sighed my disappointment and figured Uriah Heep was done, and for GOOD, this time.

But then came the Sea Of Light album, and d*mn it, I was proven wrong. SOOOO wrong! Bernie Shaw’s performance not only kicked butt, but also now seemed to drive the band forward, or at least back to the place they were right after Goalby joined for the far superior (and re-energized) Abominog release compared to the horrible Conquest period.  In fact, after further listening, I actually believed they may have even snatched onto the mood, creativity, and determination of the mid-Dave-Byron-era of the band, the line-up of Heep that created the classic albums from Look At Yourself to Return To Fantasy. To me, they actually sounded revitalized yet again, ready to kick major ass once more, and full of ideas that had been lacking for many years instead of relying on covering tracks by Argent and The Little River Band. They were finally penning some commendable material, some quality stuff! And best of all, Shaw’s vocal delivery actually sounded about 20 years younger, crammed with attitude and angst and gruff “don’t screw with Heep and rule them out” threats that definitely rang true.

The bottom line is that, with this album, Uriah Heep came back to life (no, rather, ROARED back to life).  Overall the album is loaded with songs of driving metal mixed with strong melodies, repeatable choruses, some progressive touches tossed in for good measure, and everything else that made Heep special many decades earlier. It’s apparently clear, this band once again means business. They are apparently hungry instead of simply going through the motions, and with this album they obviously mean to take back their rightful claim as to being one of the ultimate hard rock/metal bands to have ever existed. Through the decades they influenced many other acts, and finally, d*mn it, they are ready to show the public the reason why!

A Bravo Comeback Album!  This would also prove to be the beginning of another 15+ years of killer offerings—granted, they don’t release new material all that often, but when they do (on Sonic Origami, Wake The Sleeper, Into The Wild, and Outsider), it’s as high a caliber as this release, which apparently proved their muse. Indeed, I now feel that this period of the band’s history borders on my favorite Look At Yourself to Return To Fantasy period of the band. Again, a commendable comeback with long-lasting repercussions and inspiration!