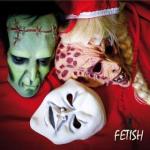 Despite their silly name, this is one fantastic band from Germany with a perfect blending of Progressive Rock and Progressive Metal. They have both a male and female vocalist, both excellent, with some terrific background vocalists as well, so expect to hear amazing vocal arrangements, many along the lines of Gentle Giant when it comes to complexity. Indeed, some of the instrumental bits also bring Gentle Giant to mind, although with a more modern/updated sound like some of Spock’s Beard’s earliest work. Some of the other usual influences are included, along with everything from Yes and The Flower Kings, and newer bands such as Unitopia, United Progressive Fraternity, and Barock Project. And in many ways, Seven Steps (for short) also reminds me of the bands Introitus and Izz when it comes to the overall merged influences and styles as well as the inclusion of those striking female vocals.

Also note, that apart from the album’s short first track “Possible Delayed” (an a capella opening of both male and female voices, a beautiful introduction to the band’s vocal perfection), all of the following eight tracks are more than seven minutes long, with one even hitting the sixteen minute mark. This gives the band a chance to expand their wings and truly soar! And man, do they ever.

“Possible Delayed” leads into the track called “PORN!” that starts with a Gentle Giant-like riff on electric piano with counterpoint guitar strokes. Right then, I sensed I was in for something truly special. Sure enough, when the male and female vocal parts kicked in with this Gentle Giant-like riff behind them, I turned up the speakers to revel in the track. Time changes abound in different melodic sections of the song, before a sax comes in to liven things up even more. More time changes occur soon afterward, only to have the song end with an instrumental riff that slowly accelerates in speed before the final fade-out. Some fascinating Prog in the span of nearly nine minutes. Wonderful.

The next track, “Still Searching,” opens with more outrageously perfect vocal performances by both male and female. The harmonies are truly spectacular. A beautiful track ensues, softer than the opening track (but only at first) until we are treated once again to numerous rhythm shifts and key changes. Just before the song starts to heat up, the addition of Mellotron was a welcome surprise. And by the time the song gets really cooking, some heavier bits (both on guitar and Hammond) give the band another dimension. And, as if that wasn’t enough goodness already, the midpoint of the song kicks into more a capella vocals, pure Gentle Giant in the fashion of “On Reflection” from the Free Hand album, jaw-droppingly intricate and magnificent. Next up comes a luscious grand piano passage that introduces another bouncy section of the song, and then more vocals are added and more delightful sections keep the song building and building into something truly grand. And then it ends with more a capella grandeur. Good God, by this time (only three songs into the album) I was already in deep, deep love with this fantastic band with the silly name.

I won’t go into the details of every single track—there is so much going on, so many “keeping me on the edge of my seat” moments happening throughout the album—or I would find myself writing for days on end in order to cram everything I enjoyed into a single review. Let’s just say that the remainder of the album continues offering up one great track after another, and what seems like endless surprises galore, way too numerous to count.

The musicians and vocalists are all so damned talented and the band’s songwriting and arrangement skills are beyond commendable. I feel blessed to have heard this release and I look forward to delving into the band’s previous three albums to see what else they’ve created for my listening pleasure.