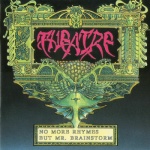 For fans of Marillion, Genesis, and (especially) Twelfth Night, this is one album you may want to investigate. To me, the singer of this Italian band sounds so eerily reminiscent (when it comes to style, tone, and dramatics) of Geoff Mann from Twelfth Night, enough so that I had to do some digging into album credits to make certain it wasn’t actually Geoff doing the singing. Regardless, the vocals, and the overall “feel” of the band is firmly entrenched in the “Twelfth Night realm” of Prog-Rock (and by that, I also mean the same realm as early Marillion, early Genesis, et al).

The album’s opener, “The Lie (A Typical Situation),” clearly shows the bands influences in numerous ways. The bouncy main passages are pure Genesis, whereas the moody midsection is reminiscent of Marillion. The keyboard runs are straight out of the Tony Banks (Genesis) or Mark Kelly (Marillion) playbook, and the guitar leads are laden with Steve Rothery (again, Marillion) tones. And several short spoken parts, with singer Ricky Tonko doing his best “Harold The Barrel” (Genesis) or “We Are Sane” (Twelfth Night) type of voices, only add to the fun and further display the band’s influences.

“Treacherous Money” continues in the same vein, and the addition of Mellotron and odd rhythm patterns in the song’s latter half once again firmly entrench the band in the Twelfth Night, etc. universe.

The mellower “Shades” is one of my favorite tracks, with the keyboard sounds and vocal melody exuding more of a Pallas vibe before another Steve Rothery type of guitar solo graces the song’s midsection. More spoken vocal lines end the song, again bringing to mind Geoff Mann and Fish.

The oddly named “Diddle Riddle (Mr. Brainstorm in the Middle)” is not only the longest track (at thirteen minutes) but is probably the high point of the album, crammed with all the usual influences. The slow-building atmospheric opening finally brings the band into a driving verse backed by off-time rhythms and featuring more Geoff Mann type vocal passages. Afterward, the organ section somehow reminds me of “The Knife” (Genesis) before the bridge section might have comfortably found a home on the Fact and Fiction album (Twelfth Night). Some additional mood changes, along with flute (or flute-sounding synths) in another passage brings us temporarily back to Genesis before the band kicks into a reprise of the opening verse section. The interesting track finally mellows again in the ending section with some more Steve Rothery “dreamy” guitar leads.

“Grannies” starts with nearly a perfect replica of “The Cinema Show” (Genesis) guitar pattern before another pretty vocal melody pops in with the same feel. More Tony Banks styled synth runs lead into a second verse until the entire band kicks in, along with some Steve Rutherford/Steve Hackett (Genesis) guitar sounds until the Genesis-type closing.

At more than eleven minutes, the second lengthy track, “Little Princess,” is also another favorite, with a spoken vocal intro that leads into more Genesis/Marillion/Twelfth Night-inspired passages throughout. A grand treat.

I won’t bother describing the additional tracks since they are certainly in the same vein. Regardless, this album is a complete thrill for a Prog-Rock lover like myself, one who continually yearns for the sound and style of early Genesis. Man, I really liked Theatre. Too bad they had only a single album since I would have loved more from them.