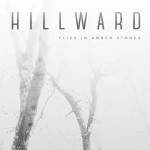 Although the debut album by this three-piece Canadian band is typically labeled as Progressive Metal on various music-review websites, that’s actually only one small aspect of Hillward’s overall sound. Indeed, I would classify this band as mainly a Melodic Hard Rock band, with both some Metal and Progressive influences.

Take “Flies in Amber Stones,” the opening title track, for example. The main riff, pounding and catchy, sounds almost “old school rock ‘n’ roll” (I say this as a positive) and would probably not seem out of place on an album by a band such as Gotthard, Babylon A.D., or Black Star Riders, whereas the verses, bridges, and choruses are lighter, a mixture of both Hard Rock and AOR at times. The instrumentation, however, is where the Progressive touches occasionally pop in, with some interesting keyboard washes, some chunky and funky guitar bits, little semi-hidden atmospheric tones or riffs that don’t always reveal themselves until a second or third listening.

This holds true for many of the tracks on offer here…one moment a song might sound Hard Rock, the next AOR, then back and forth in equal doses, with everything underscored by some Prog-Rock touches, some Metal guitar tones, and even some funky rhythms periodically, which all add different dimensions to the track’s overall soundscape. “The Missing Link,” as another example, might seem equally at home on either a Hard Rock or AOR album, or even some of the more melodic releases by a Prog band such as Porcupine Tree.

“When It All Comes True” is one of my favorite tracks, and one where more of the band’s Progressive tendencies come to light. Yet again, these tendencies reveal themselves only in subtle ways, be it the choices of particular keyboard textures, where rhythms suddenly shift, where guitar tones become heavier for dramatic effect. In other words, don’t expect any lengthy Dream Theater-like excursions into territories outside the song’s natural structure, but do expect some seemingly perfect instrumentation that always enhances a song’s overall melody line or general mood.

There’s nothing at all innovative on offer here, nothing to set the Prog-Metal world on fire, but there is quite a bit to enjoy, especially if you’re seeking some pleasant, straightforward, undemanding music. The vocals are always melodic and the songs are typically entertaining, with the arrangements and instrumentation coming across as highly professional. I can certainly imagine myself listening to this album again and again.

One final note: don’t be fooled…Hillward may be considered a new band, but its members actually have years and years of experience in another band (Southern Cross). Hillward, seemingly, is only a side project for them. Also note, that since I’m unfamiliar at this time with the other band, I can’t compare the two.