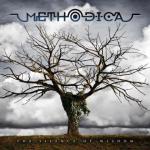 I heard about this Prog-Metal band from Italy just recently. From what I understand, Methodica has released only two albums thus far, although they’ve supposedly been in existence since the late 1990s. Therefore, for a band that’s been together for so many years, would the band’s true level of experience show? The answer—it does indeed!

A mellow intro named “Ukiyo-E: Intro” offers a light synth riff with additional symphonic keys, which leads into the track “The Angel Lies Dying.” Here, the keyboard opening reminds me of some of Greg Giuffria’s brief intros on various House Of Lords albums. Quickly, the full band slams forth with a bouncy metal riff. Immediately noticeable is the intricate instrumentation throughout the track—the various guitar and keyboard bits that subtly pop up in the verses and choruses, the off-time rhythms and time changes that do not allow a listener to get too complacent—the reason I’m so fond of Progressive Music. In other words, I love surprises in my music, and Methodica offers them up readily. You can tell that the band has indeed been together for quite some time; the instrumental interplay is professional and seasoned, showing complete teamwork. To put it bluntly, they are tighter than a dress on a hooker!

For the next track, simply entitled “J,” the instrumentation is once again quite diverse, with numerous keyboards supporting monster guitar riffs, with the band delivering both driving rhythms interspersed with several lighter segments or countless rhythm shifts, and the vocalist adding his often-intricate melody lines over the top. The synth or guitar solos, when they appear, are typically short and sweet forays into Metal-land that don’t overstay their welcome. Even some sound effects pop up on occasion, adding extra sound-pictures.

The piano-driven ballad “Only Blue” is both ethereal and spacey, providing some breathing room for the listener and allowing the vocalist a chance to showcase the true depth of his range as he delivers a beautiful melody throughout. The track is quite hypnotic, with the band slowly building to a wailing guitar solo that abruptly ends for a dramatic keyboard closing. A terrific track!

“Caged,” at nearly fourteen minutes, is the longest track on offer here, and allows Methodica a chance to really spread its wings and experiment. There are so many keyboard sounds, so many slamming rhythms and time shifts, so many high-voltage guitar riffs in the opening three minutes alone that one has to wonder if they’re on a trek into Prog-Metal heaven. The mellow mid-section eventually leads into a terrific guitar solo before the keyboardist takes over in an intricate Symphonic-Prog segment that occasionally brings to mind Rhapsody of Fire’s grandest moments. Bravo to the band!

Probably my favorite track, “The Lord of Empty Spaces” follows, gifting the listener with another ten-plus minutes of Prog-Metal at its finest. The complex arrangement and melody line somehow reminds me of the bands Threshold and Dream Theater, although other acts such as Shadow Gallery, Adagio, and Andromeda (among others) sporadically sprang to mind during the song’s various parts. Here, the vocalist is once again given the opportunity to shine in the opening ballad section. Just before the song’s halfway point, however, a sudden shift in mood thrusts the listener back into the exciting metal universe, with more breaks and atmospheric changes adding to the song’s enjoyment before the luscious melody and instrumentation from the opening segment returns. The skill of each musician is quite commendable, and the varied track never gets boring.

“Destruction of Idols” is another fun adventure into well-performed Prog-Metal, whereas “Ukiyo-E” is another magnificent ballad-like track that features more engaging vocals, thick Jon Lord organ, and probably the finest guitar solo on the album in the song’s center segment. From that point on, the rhythm picks up and the keyboards begin to dominate, at first offering some intriguing “orchestral stabs” before a synth solo further engages the listener. A gentle ending, with some bass guitar riffs backed by light organ bring the song down to a slow fade.

Now, the oddest track available here is a remake of the Genesis classic “Firth of Fifth.” But don’t expect anything in the way of the same Genesis sound. Indeed, were I not highly familiar with the lyrics of the original track, as well as the melody of the song’s original guitar and keyboard solos, I would not have recognized it at all. The arrangement of the song, the heavy instrumentation, even the chord patterns during the verses, are so completely at odds with Genesis that it sounds like a totally different song. A highly original rendition to be certain, although, granted, a bit jarring for someone like me who is a Genesis fan.

Be that as it may, this band has talent galore and (especially when it comes to the arrangements, with “Firth of Fifth” being a prime example) receives high marks for its creativity. The musicians are obviously skilled at their instruments, and Methodica has a better-than-average vocalist who possesses only a slight accent when singing the English lyrics, although during the album’s heavier parts, I wish the vocals were a tad louder, a criticism I seem to offer a bit too often these days when reviewing Prog-Metal albums. Regardless, despite that one criticism, I’m sure many Prog-Metal lovers will be thrilled by Methodica’s newest collection of tracks.