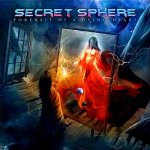 Secret Sphere is an Italian band I’ve enjoyed quite a bit since I stumbled upon it about ten years ago, just as its Heart & Anger album (the group’s fourth) appeared on the scene. Since those days, I dove into the band’s archives and purchased the three previous albums, as well as the two subsequent albums upon their release, and never once have I been disappointed with any of the material. To me, Secret Sphere always delivered a perfect cross between sizzling Power Metal, intricate Progressive Metal, and bombastic Symphonic Metal, offered a nice balance between guitars and keyboards when it came to its lush instrumental arrangements, and never lost its edge or creativity through the years. Consequently, at various music review websites, I eventually rated each of the band’s first six albums with 4 Stars. Not a shabby track record (no pun intended) for certain.

But at the beginning of this latest decade, after the band had released the Archetype album in 2010, I learned that Secret Sphere had parted ways with longtime vocalist Roberto “Ramon” Messina. Over the years as the band had produced its six albums, several other members had come and gone, and the group’s sound hadn’t changed, or at least I hadn’t detected it. But we all know what happens any time a lead singer (especially one with a recognizable voice) leaves a group—a “major sound change” is usually imminent, unless a band finds itself miraculously lucky and locates a replacement with a nearly identical tone and vocal style (a rare occurrence). Therefore, I couldn’t even imagine what the future held in store for Secret Sphere and its sound/style. I could only pray the band would hire a suitable replacement for Messina, one that wouldn’t alter its overall sound (the sound I enjoyed) so drastically.

Thankfully, as it happened, I need not have feared. Indeed, I was almost beside myself with excitement when (in 2012) I finally learned that not only did the band find a replacement with a similar vocal range and style of delivery, but Secret Sphere had done so by recruiting the fantastic Michele Luppi, probably one of the most gifted and (of equal importance) one of the most recognizable vocalists of the age. I’d been a fan of Luppi’s, and had purchased everything (at least, I’d hoped so) he had ever done, albums from Vision Divine and Killing Touch (bands quite similar to Secret Sphere), to the AOR bands Los Angeles and Michele Luppi’s Heaven. As I said, the man possesses one of the best voices to have emerged in Rock these past twenty years, and is equally adept at singing so many genres. Not only does he have a truckload of power behind his voice, but a wide range, and a true gift for melody. Needless to say, I couldn’t wait for the next Secret Sphere album, Portrait of a Dying Heart, released later that same year.

And not only was I not disappointed (as usual) by Secret Sphere’s output, but I rated this album 4.5 Stars, higher than any of the band’s previous releases. And the reason is because of Luppi’s presence behind the microphone and his influence on the band when it comes to contributing memorable choruses.

So, not only did Secret Sphere once again deliver killer material performed by its top-notch musicians (just listen to the orchestrated and majestic opening instrumental “Portrait of a Dying Heart” to experience the high quality of musicianship involved), but a nice variety of material as well.

For instance, the tracks “X” and “Secrets Fear” offer driving Power Metal rhythms one moment, then switch to mid-tempo sections the next, then the band goes back and forth between the two as the songs progress, while the instrumentation is both symphonic at times, then light and sparse at other times. And all the while, Luppi is belting out melodic verses and choruses, his wide range on full and glorious display.

Some rather straightforward Power Metal (with chugging guitars, orchestrated keyboards, and slamming rhythms) can be found on “Wish and Steadiness,” “Healing,” and “The Fall,” often reminding me of bands such as Vision Divine (no shock, considering Luppi’s identifiable voice), Sonata Arctica, or Stratovarius, especially during the instrumental sections where some showy and adroit guitar and keyboard solos grace the tracks.

Other songs such as the excellent “Lie To Me,” “Eternity,” or “Union” are not only more AOR-ish—thanks to the stellar vocal performances—but also highly progressive when it comes to the fluid arrangements, the diverse tempos and instrumentation being frequently altered to best enhance and support the melody lines (which are usually chock-full of layered background vocals—damn, Luppi definitely knows how to stack those numerous harmonies).

The album also includes two rather grand and moving Power-Metal ballads in the form of “The Rising of Love” and “Eternity,” showing yet another side to the talented band. And, to my ears, both songs also include Luppi’s best vocal performances overall. (One minor criticism: I might not have placed the songs back to back in the track running order.)

Also note, the final “bonus track” is an alternate version of the song “Legend” (originally released on the band’s impressive second album, A Time Never Come). As much as I liked the original song just fine, this is largely an unnecessary inclusion since it basically adds nothing new. Instead, I would have definitely preferred another new track featuring Luppi.

Be that as it may, this album definitely deserves that extra boost of a half-star to my typical overall rating for Secret Sphere albums. With a new vocalist at the helm, not only has the band not lost anything when it comes to its lofty level of musicianship, professionalism, and creativity, but has gained so damned much in the vocal department, releasing a collection of songs more memorable than any previous Secret Sphere album. To me, the band has always been one of the most consistent and noteworthy groups in the Power Metal/Progressive Metal/Symphonic Metal genres, yet somehow underappreciated. Therefore, I can only hope (with this high-quality release in its catalogue) Secret Sphere can finally get the recognition it so richly deserves.