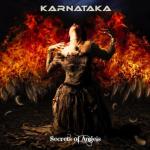 Since I’m always on the lookout for Progressive Rock bands with female vocalists (hunting for the next Magenta, my current favorite Prog-Rock band), I took notice recently when I saw postings regarding the band Karnataka and eagerly began investigating the group. To my frustration, I soon realized that the band has been around since the late 1990s, and it has five albums in its catalogue. Why I hadn’t heard of the band before this year is anyone’s guess—and quite annoying—but at least I know of Karnataka’s existence now. And more importantly, after savoring to the band’s most recent album, I now plan to seek out the four previous releases.

Although Karnataka is typically labeled as nothing other than Progressive Rock on most music-related websites, the label is extremely inaccurate and misleading. Indeed, the majority of tracks on this album don’t sound much like Prog-Rock, but thankfully I still enjoyed what the band does offer. The songs range from a union of genres such as AOR meets Symphonic-Prog (“Feels Like Home” and “Because of You,” both occasionally bringing to mind the music of Lana Lane and Within Temptation), to lush and dramatic ballads (“Forbidden Dreams” and “Fairytales Lie”), to melodic Hard Rock or Metal with heavy Symphonic touches (such as the Led Zeppelin-inspired opening track “Road to Cairo” with its “Kashmir” atmosphere, or “Poison Ivy” and “Borderline,” which both fall somewhat into the After Forever or Nightwish territory, only without the operatic vocals).

But the final track, the album’s unrivaled masterpiece, is where the band displays its true calling (true colors). “Secrets of Angels” is a twenty-minute excursion into actual Prog-Rock. Both Celtic and Prog-Folk influences are here in abundance, and the rich and full orchestrations, the varying moods and often-dreamy soundscapes, along with the intricate instrumentation and soaring vocals, come across as a heavier version of bands such as Renaissance or Edenbridge. I couldn’t help listening to the track several times back to back, hoping to absorb all the song has to offer, or wishing Karnataka would concentrate on more tracks like this in the future. Excellent!

So, although in investigating this band, I did not locate the next Magenta (again, the style of music isn’t even close), yet I did discover a talented band nonetheless, only one that shouldn’t be classified as pure Prog-Rock. Be that as it may, there is quite a bit to enjoy on this album. The musicians are superb, the songwriting is commendable, and for me, the vocals of Hayley Griffiths (the newest in a long string of female singers since the band’s formation) are undoubtedly the high point of the album. Her tone is crisp and clear throughout, her pitch spot-on and her melody lines memorable, and her range wide and impressive. With her style and tone being somewhat unique, I can’t directly compare her to any specific singer (which is always a good thing), but she easily falls into the same enviable category of vocalists such as Sabine Edelsbacher (Edenbridge), Linda Odinsen (IOEarth), Sharon den Adel (Within Temptation), or Lana Lane.

Yes, this band has won me over based on this album alone. So now I can only pray the different vocalists on Karnataka’s previous releases have equally enjoyable performances.