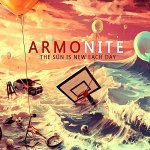 First off, I feel it only fair to warn Prog-Rock fans about one major element regarding this album—not only does it contain no vocals, but it also contains no guitars. None, nada, zip! And also, the album does not sound like Emerson, Lake & Palmer in any way, shape, or form.

“Huh? Did I read that correctly? No guitars? You can’t be serious?” Yes, I can envision many of you asking those very questions as the sudden sheen of both apprehension and equal curiosity appear in your eyes.

But that is indeed the case with Armonite, an instrumental band from Italy that (currently) is a four-piece ensemble made up of only Violin, Keyboards, Bass, and Drums. From what I have been able to gather, this band released a debut album (Inuit) back in 1999, which included an extra violinist in the group, but after some reshuffling of personnel through the years, the band has now settled nicely into a four-piece, and finally released this, the second album, in 2015. Now, from that original group, only the mega-talented keyboardist Paolo Fosso and lead violinist virtuoso Jacopo Bigi remain, and for this album, they’ve recruited seasoned percussionist Jasper Berendregt and bassist Colin Edwin (the latter also a member of Porcupine Tree). So for any Prog-Rock lovers hoping to discover an album featuring guitar in the style of Steve Howe, for instance, or Steve Hackett, or Steve Hillage, or Steve Wilson, or Steve Rothery, or Steve Morse, or Steve…damn, until this moment, I never truly noticed just how many guitarists named Steve are actually involved in Prog-Rock and have signatory styles. Anyway, for lovers of the genre hoping for another “Steve” type of musician, you can either turn your backs on this album now, or perhaps allow the adventurous part of your nature to take control and give this album a chance. As for myself, I’m thankful I did.

So when listening to these nine tracks, did I miss the sound of a guitar in any way? The answer: hell, no! The six strings of a typical guitar have been successfully replaced by the four strings of Jacopo Bigi’s violin. And the often-complex layers of violins, mixed with piano and other various keyboard sounds, and with a dynamic rhythm section kicking things into high gear where necessary, all do a splendid job at filling any gaps where one might normally expect to hear the guitar. Indeed, the band’s sound is full and rich throughout the album, as immediately evidenced in the opening track, “Suitcase War,” which in many ways replicates the excellent Prog-Rock/Jazz-Fusion music produced by other mainly instrumental groups such as Gamalon or Dixie Dregs, only with added sass. Indeed, as the tracks unfold one after the other, I kept thinking this is “Jerry Goodman from Mahavishnu Orchestra with a serious rebel attitude.”

The other thing that hit me when listening to the album is the rather buoyant, lightheartedness of it all. Certainly there are some classical influences (one would expect that with music featuring a violin) but nowhere did the music seem too weighted down or dreary in any way, but often energetic, bouncy, and rambunctious in the overall delivery and mood (the tracks “Satellites” or “‘G’ As In Gears” are prime examples). Nothing seems to be taken too seriously, but rather, a spirit of whimsy dominates. In fact, what I would consider the only more “serious” piece in this collection is the track “Le Temps Qui Fait Ta Rose,” which features piano and more “traditional sounding” violin. But even this track is rather calming and light, not grave or too solemn.

Another track, the mellower “Slippery Slope,” brings to mind the more moody aspects of the band Kansas during its heyday, with tinkling piano runs and a solid rhythm section providing almost a dreamy background for some gentle “Robby Steinhardt-esque” violin leads. “Sandstorm,” on the other hand, includes what sounds like a sitar, and includes wistful percussion throughout (including a gong), as well as some synth sounds that generate a mood of playfulness one might normally find on an album by Dixie Dregs. Moreover, during other tracks (“Die Grauen Herren” or “Insert Coin,” for example) I’m reminded of either PFM’s or Gentle Giant’s forays into some eclectic territory. Whenever intricate instrumental counter-play is featured in jazzier or avant-garde passages, I also couldn’t help thinking that the teaming of Frank Zappa with Jean-Luc Ponty wouldn’t be too far afield regarding any comparisons.

Another thing to keep in mind is that all nine tracks are quite short by Prog-Rock standards, each clocking in at under the four-minute mark, so no one track overstays its welcome. Instead, the listener is whisked from one mood to the next at a rollicking pace, allowing no boredom to settle in, and this (along with the jovial atmosphere of the collection) reminds me of instrumental albums by artists such as Marc Bonilla or Steve Vai, only with violins instead of guitars.

So guitars-schmitars! Who needs them, right? Certainly not this foursome, this group of capable musicians who are forging an alternative path into intriguing and often-exciting Prog-Rock territory. Armonite’s relative “line-up uniqueness” alone deserves a round of applause, and the band’s efforts to investigate both defined and uncharted regions of the genre using this line-up are nothing short of a success. Job well done!

Being mostly unfamiliar with guitarist/composer Andy Jackson, either through his previous solo album (2014’s Signal to Noise) or his work with his band The Eden House, I wasn’t sure what to expect before sliding this CD into the computer. But then, after learning that Andy had engineered for Pink Floyd in the past, I finally had a clue as to what this CD might include. The music, I figured, would probably be of a similar nature to Pink Floyd, and to no great surprise, my presumption proved accurate.

Therefore, the collection of songs included on this album—indeed, the entire atmosphere, from beginning to end—is pure Pink Floyd, only with perhaps a more updated production quality. In fact, to my ears, this album is flawlessly produced, with the instruments blending together in a harmonious marriage of sound, with no instrument being too domineering or boisterous, but perfectly in sync with its partners. Both acoustic and electric guitars, synths and Mellotrons, bass and drums appear, providing a full and rich soundscape, quite spacey as expected, with the vocal lines drifting lazily across the top.

The ten individual tracks are a combination of both instrumentals and vocal pieces, with several lengthy numbers included. But in truth, the shorter tracks that dominate the first half of the album seamlessly meld into each other, actually creating one dreamy “experience.” Moreover, Prog-Rock lovers shouldn’t expect anything too jarring here. Like the music of Pink Floyd, there is nothing mind-blowing when it comes to soloing instruments, and no abrupt time changes popping up at unexpected moments. Additionally, there are no shocks when it comes to the vocal melodies either (apart from one enjoyable section in the middle of the seventeen-plus-minute “Drownings,” where a female vocalist provides some welcome differentiation). This, therefore, leads me to one of the problems I had with the album overall…

Certainly all the tracks offered here are pleasant enough, with the musicianship and (as previously mentioned) the production being outstanding. Yet many of the tracks (when it comes to either the general arrangements/orchestrations or even the atmosphere) are way too similar for my tastes. In fact, apart from that brief section in “Drownings” featuring the female vocals, nothing much stands out, or is altogether memorable. After listening to the album on approximately half a dozen occasions over the course of two days, I’m still hard-pressed to pinpoint any other instance that inspired me to pay closer attention, any other instance that provided me with another one of those “Ah-huh, I remember that!” moments. Instead, I’m left with only a general impression of a “mellow, spacey, rather enjoyable” listen when it comes to the album as a whole, but that’s it. And this, I’ve come to determine, is due to one particular element…the lead vocals.

In general, I found the vocal passages to be quite bland. In fact, the vocals are delivered in a low and extremely limited range, lacking any true diversity regarding melodies, and sometimes sound more than a tad “iffy” when it comes to accuracy. I’m also not a huge fan of the “talk-singing” style used throughout, which is why the appearance of the female vocalist popping up in that single song made the only lasting impression on me. I can’t help but feel that were Mr. Jackson to hire a singer with a wider range, a more emotional style of delivery and a flair for “the dramatics,” the music would benefit greatly. Unfortunately, when the lead vocals are “off,” it’s usually that single musical flaw that will ultimately make or break any album, regardless of the other performances contained throughout. And I’m sorry to say, this album does indeed suffer from this particular aspect, and for that, I couldn’t bring myself to rate it higher.

So to summarize, for Prog-Rock fans who are excited by music related in any fashion to Pink Floyd, there is certainly much here for you to savor. The problems I had with this album—the lack of variety when it comes to the “feel” of the tracks, or the uninspiring vocal performances—may not mean much to you, and I wholeheartedly respect that. Therefore, if you’re seeking a journey into some tranquil territory, a chance to drift on a sea of lush chord patterns, breezy rhythms, and soothing sound effects, then this just might be the album for you. It’s certainly worth a spin.