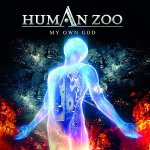 This terrific (and sadly obscure) German group has been around for about a decade, and in that time has released four superb albums, this one being the most recent.

When it comes to the music on My Own God (and, frankly, on each of the band’s albums), Human Zoo plays high-powered Hard Rock with beautiful AOR flourishes.

On this particular release, on “One Direction,” “NSA,” and “Love Train,” Human Zoo seems to draw inspiration primarily from its German countrymen, with Scorpions, Pink Cream 69, Jaded Heart, or Bonfire-inspired heavy yet melodic tracks, while at other times (on songs such as “Solitaire,” “Like A Bitch” or “4U”) either Switzerland’s Gotthard or perhaps Finland’s Brother Firetribe seem like chief inspirations.

But the inclusion of the occasional saxophone solo or accents—highly unusual for a band of this nature—on tracks such as “Cry Baby Cry” or “My Own Illusion,” really sets this group apart from the others, adding an unexpected treat. And with the sax and some keyboard-accented AOR-type songs appearing on the album, such as “A Day To Remember,” “Wave Your Flag,” and “Reminds Me Of You,” several North American groups as diverse as Michael Stanley Band or Harem Scarem also spring to mind.

So to me, each Human Zoo album is special—always well-performed and well-produced, with ultra-catchy and melodic riffs and choruses—making each new release by this group an “auto buy.”