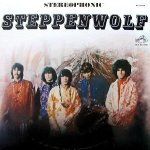 In the post “flower power” era of music, many of my favorite “heavy” American/Canadian bands adopted an intriguing yet similar style—a “definitive” sound—made popular by bands such as Grand Funk Railroad, Bloodrock, The Guess Who, Three Dog Night, etc…and (especially) Steppenwolf, who (arguably) were the potential “instigators” or “grand-daddies” of that particular unique “American” style.

Therefore, the debut Steppenwolf album will always hold a special place in my heart, thanks to the sizzling guitar tones merged with the distinctive Hammond organ, the freewheeling rhythm section and the raucous lead vocals, and an often-atmospheric production style. Certainly, in many respects, British bands had a similar sound, but that sound was somehow different, typically more classically oriented and not quite as “garage-rock” influenced. So the heavier American bands often tipped a hat more toward L.A.’s Steppenwolf for their overall inspiration instead of groups such as (for instance) Yardbirds, which influenced so many of the British bands in those days.

With the iconic (and outrageously overplayed) track “Born To Be Wild,” as well as the songs “Sookie Sookie,” “The Pusher,” “The Ostrich,” and “Hootchie Kootchie Man,” this album is nothing short of a pure classic—sorry, make that “CLASSIC”—which obviously inspired countless other acts in the United States and eventually defined a special “American sound of the era” that distinctly set it apart from its British counterpart sound/style. This is perhaps the ultimate “cruising” album, meant to be played while whisking down the highway with the wind in your hair, the sun at your back, and the feeling of American freedom racing through your veins. Just play it loud!!!