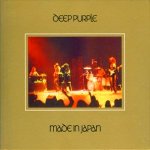 In my eyes, this is probably the finest live albums of all freaking time, in any rock genre, and even today the album holds enormous and undeniable power.

Ian Gillan’s vocal performances are absolutely searing and jaw-dropping (just listen to his ear-piercing screams on “Child in Time,” or the way he vocally counter-punches Ritchie Blackmore’s ad-libbed riffs on “Strange Kind of Woman”), so it’s no wonder why the man was perhaps the biggest influence on my own musical career.

Plus, the other guys in the band ain’t too shabby either…indeed, geniuses, each and every single one of them, no doubt. “Highway Star” is especially driving, thanks to Ian Paice’s frantic drumming and Roger Glover’s thumping bass, and blows the studio version of this classic track out of the water, while the song “Lazy” is anything but, especially when it comes to Jon Lord’s crazy, free-form intro and Blackmore’s bluesy guitar noodling. And the side-long “Space Truckin’, with its wild and extended jamming, shows exactly what these stellar musicians could do when given the freedom to improvise on stage with no time limits. Simply amazing.

Anyone who claims to be a true fan of Hard Rock from the ’70s certainly has this album in their musical collection, and if they don’t, then FOR FREAKING SHAME. Without question, this album is a perfect 5 Stars…sheer brilliance and unrivaled excellence!!!