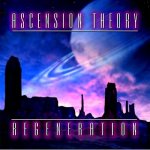 This short-lived band from New York State was basically an extension of Aztec Jade, one of the first promising Prog-Rock/Prog-Metal bands to have emerged in the wake of Dream Theater’s initial success. Although Ascension Theory possessed a style a bit different from Aztec Jade’s—a heavier emphasis on keyboards, with arrangements more in the Pomp-Rock spectrum as opposed to Prog-Metal—the band nevertheless fell within the category of “impressive yet shamefully ignored” Prog acts.

Regeneration, the first of Ascension Theory’s two albums, contains lush synths and intricate guitar accompaniment on tunes such as “Eridani,” “Warriors,” “Enemies,” “Speaker,” and the glorious title track, while a few piano-driven ballads such as “Lovers” and “Sleepers (One Flies Away)” add an extra touch of class and sophistication. And with singer Leon Ozug bringing his crystal clear, almost AOR-ish voice with him from the previous group, the band seemed destined for success.

Unfortunately, after its sophomore album (Answers) was released in 2005, Ascension Theory seemingly vanished, but at least left behind two elegant and melodic Symphonic Prog collections that continue to entertain.