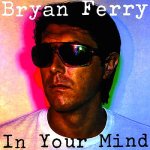 No one can deny that vocalist Bryan Ferry has a style and sound all his own. Being a fan of his performances during the Roxy Music years, Bryan’s unique vocals and songwriting always held me in thrall, so I was naturally drawn to his solo efforts.

Unfortunately, since he had a fondness for reworking old “classics,” his early solo albums featured few original compositions (or included only some revamps of early Roxy songs), and since his songwriting/lyrics were exceptional with Roxy Music, I therefore felt slight disappointment.

But once Roxy Music started to fade and Ferry found himself without a working band to record his newest Art Rock/Art Pop songs, his solo albums eventually reflected this shift in focus from “covers” to “originals.” So In Your Mind, the first album of Ferry’s all-original compositions—his fourth solo album overall—was in many respects another Roxy Music album, with numerous tunes sounding as if they could have easily fit somewhere on Siren, for example, and several of his former Roxy cohorts (guitarist Phil Manzanera, drummer Paul Thompson, and bassist John Wetton) making guest appearances.

True, in my eyes, nothing Ferry created on his own could ever come close to topping or at least matching Roxy Music masterpieces (For Your Pleasure, Stranded, etc.), but since the band was technically on “hiatus” during the recording of this album, In Your Mind was the closest one could get to enjoying more Roxy-styled material, even though it’s not quite as cohesive or as “genius.” And although more straightforward and possessing a less “arty” flavor than Roxy Music, In Your Mind nevertheless included several gems such as “This Is Tomorrow,” “Tokyo Joe,” “Party Doll,” “Love Me Madly Again,” and the title track, therefore, it remains my favorite of Ferry’s solo efforts and actually rates higher in my opinion that any of the material Roxy Music released once it reformed for the Manifesto album.