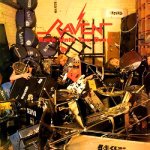 Although never achieving more than “cult status” in America, Raven gained much attention in the U.K., thanks mostly to magazines such as Kerrang! and Metal Hammer, and the band got heaped into the generally exciting “New Wave Of British Heavy Metal” movement during the ’80s.

Even though Raven delivered nothing truly “new” in the Metal/Rock genre, the trio—brothers John Gallagher on bass and vocals and Mark Gallagher on guitar, as well as Rob “Wacko” Hunter on drums—did indeed pack a heavy wallop on its self-produced debut album, offering up a dozen in-your-face tunes like “Lambs to the Slaughter,” “Hard Ride,” “Rock Until You Drop,” “Don’t Need Your Money,” “Hell Patrol,” and “Tyrant of the Airways,” many of them catchy and driving, not to mention loud, rebellious, and energetic.