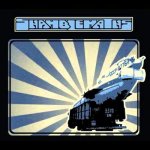 Well, hot damn, this release had my jaw plummeting to the ground long before the first of the three lengthy tracks, the twenty-seven minute “Conglomeration (Or: The Grand Pathetic Suite),” had even neared its midpoint. The nine-and-a-half minute “A Failing Ember” and the twenty-minute closer “Stalker” affected me the same way—pure joy and amazement.

Frankly, the debut album by Norway’s Shamblemaths is a wild and wicked trek along countless Prog-Rock roads, and never taking the straight path from one destination to another. Instead, the band whisks the listener along typically adventurous and occasionally familiar avenues (Neo-Prog, Avant-Prog, Symphonic Prog, Jazz-Fusion) yet with abrupt side trips through numerous alleyways that connect each and every one of these main thoroughfares, making for some bizarre twists and turns, often at breakneck pace, enough to bring about the onset of musical whiplash!

So, for Prog-Rock fans who want to experience an enjoyable jaunt along the sinuous and detour-laden boulevards of creativity, this is one album you’ll likely appreciate and applaud as much as I do.