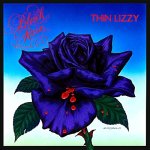 Black Rose: A Rock Legend has to be one of my favorite Thin Lizzy releases, which includes some of bassist Phil Lynott’s most mature, inspired, and heartfelt songwriting up to this point in his career, such as the thundering, riff-heavy rockers “Do Anything You Want To,” “Waiting For an Alibi,” “Get Out of Here,” “Toughest Street in Town,” and the Jailbreak-like “Got To Give It Up,” along with the wonderfully funky “S & M,” the romantic and deceptively catchy mid-tempo tunes “Sarah” and “With Love,” and of course the grand and layered closer “Róisín Dubh (Black Rose) – A Rock Legend.”

This album alone proves that Lynott and Brian Downey made for a formidable rhythm team, creating a solid and rumbling backbone for the band’s signature twin-guitar sound, and it certainly didn’t hurt matters that kick-ass guitarist Gary Moore was also a member of the band at this time, his work with second guitarist Scott Gorham making for some memorable dual axe-attacks, and Moore also blazing a trail of killer solos throughout this rock-solid collection of tunes.

(RIP to both Phil and Gary…you are sorely missed.)