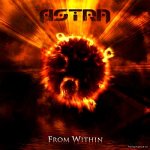 Not to be confused with a newer Prog-Rock band in America with the same name, Astra (from Rome, Italy) is a Progressive Metal band formed around 2001 that created three stellar albums between 2006 and 2014, with From Within being the “middle child,” so to speak.

One thing that makes this band truly special is the presence of vocalist Titta Tani (DGM/Abstracta), who has one of those “normally” crystal clear voices with an extraordinary range that can easily turn gruff and demanding when the lyrics or a song’s aggressiveness warrant the extra “oomph”—basically sounding similar to either Michele Luppi (Killing Touch/Vision Divine/Secret Sphere) or Russell Allen (Symphony X/Adrenaline Mob/Allen-Lande), depending on the track’s requirements.

On From Within, the opener “Over the Hills” hooked me immediately with its raw power, adept musicianship, and sparkling vocals, and all the subsequent songs of complex yet melodic Prog-Metal take on similarities of groups such as Vanden Plas, Symphony X, DGM, Vision Divine, etc. Indeed, to me, From Beyond is one of the better Prog-Metal albums that has emerged in the past decade and has—thanks to Titta Tani’s spectacular vocals, along with the rather imaginative keyboard excursions, the intense guitars and rhythms—never been absent from my I-Phone’s playlist since the day I downloaded these ten entertaining tracks.