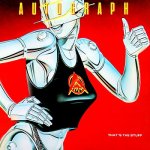 From L.A., the band Autograph burst onto the scene in 1984, playing a style of Hard Rock with super-catchy melodies and anthemic choruses, plus above-average musicianship that made mincemeat of many other bands from the “hair band” era, and a singer (Steve “Plunk” Plunkett) who possessed an instantly recognizable voice. For some odd reason, when it came to the music itself, the band often reminded me of Legs Diamond and (the more commercial side of) Angel, but included a vocalist with a completely different “party rock” style/attitude.

That’s the Stuff (the band’s second album) was absolutely addicting. I recall playing it several times per day when I first purchased it, with tunes like “Blondes in Black Cars,” “Six String Fever,” “Paint This Town,” “Take No Prisoner,” and “Built for Speed” cranked up in my car as often as humanly possible, and even now, more than thirty years later, the collection of tracks still sounds great—only today, the album delivers up fond memories along with those sing-along choruses I remember so well.

That’s the Stuff, for sure…”Hair-band/Stadium Rock” at its finest.