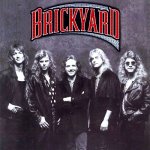 From Los Angeles, the obscure quintet named Brickyard released only a single album before disappearing off the map.

Musically speaking, many of my favorite tracks in this collection (“White Light,” “Someone to Love,” “Leave Well Enough Alone,” “Baby I’m in Love Again,” and “Break the Ice”) are melodic, medium-paced rockers, all rather straightforward, guitar-oriented tunes with a few light keyboard embellishments tossed in. And with a capable vocalist who has a similar tone and style as Thunder’s Danny Bowes, Brickyard often reminded me of that particular British group.

Although, since the musicianship, the overall energy levels, are a tad refined in nature (ie. no truly pounding rhythms, no screeching guitar solos, etc.), the music might also seem more akin to the disciplined material recorded by Brian Howe-era Bad Company.

Additionally, the album opens with a commendable cover of The Babys’s song “A Piece of the Action,” so the earlier material from the John Waite-led group is another obvious influence when it comes to Brickyard’s style on this debut.

Regardless, the ten tracks offered here are pleasant enough, with plenty of melodies to go around and plenty of talent shown by the band members to make me wish that Brickyard had been allowed another album on which to further develop its sound.