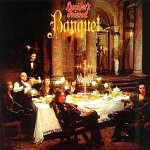 In 1974, Germany’s Lucifer’s Friend made the biggest, most jarring change in style yet. The Banquet album is a full-out foray into Jazz-Rock territory with the use of a brass section throughout. Hell, it’s basically Lucifer’s Friend meets Blood, Sweat & Tears.

To be perfectly honest, I hated the album at the time I purchased it, about a year after its release. The cover was so misleading, showing the band members, all dressed in black with their hook-handed mascot nearby, sitting at a banquet table in a gloomy Dracula-like castle, so I fully expected a return to the Heavy Metal sound of the cherished debut album, of which I was still so enamored.

Therefore, this foray into Jazz-Rock was a total shock to the system (and to my record needle) and everything just rubbed me the wrong way. Indeed, it took me three decades of letting the album sit on the shelf before I once again dared to give it another listen.

And what do you think happened? I’ll be damned, but I actually loved it.

Indeed, Banquet is now one of my favorite albums by the band, mostly due to two specific tracks, both masterpieces: “Spanish Galleon” and “Sorrow,” both of the songs surpassing the eleven-minute mark and being absolutely the best vocal performances John Lawton ever delivered on vinyl. The high-octane performances by the rest of the band (guitarist Peter Hesslein, keyboardist Peter Hecht, bassist Dieter Horns, and drummer Herbert Bornhold) shine through also, with the energetic instrumentation, complex arrangements, and wickedly wild horn section just adding to the treat.

So savor the Banquet provided by Lucifer’s Friend, one of the most amazing and diverse bands to have ever existed…