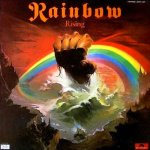 A perfect 5-Star masterpiece. To this day, forty-plus years after purchasing this album, I still get chills along my spine and goosebumps on my arms whenever I listen to each of these six tracks, especially the amazing high-fantasy-inspired “Stargazer,” the best and most dynamic song this band ever recorded, and I’m certain I’m not alone in my physical reaction when hearing it.

And to me, each track on Rising is a winner. The opener, “Tarot Woman,” is a feast of Ritchie Blackmore’s awesome guitar, of Ronnie James Dio’s commanding vocals, of Cozy Powell’s slamming drums, of Jimmy Bain’s tasty bass playing, and begins with a rare showcase for keyboardist Tony Carey, while the driving, manic, Deep Purple-like closer, “A Light in the Black,” is another near masterpiece that reigns high on my list of favorite Rainbow tracks, yet often seems forgotten in the shadow of the aforementioned “Stargazer,” which opens the side.

The catchy “Run With the Wolf” features a keyboard lead that sounds eerily similar to a guitar, while perhaps the most immediate song on Rising is the bouncy “Starstruck,” a tune I saw covered by many locals bands in my city through the years—indeed, I had to master it myself for several of my own group’s that insisted on adding it to our set lists. And “Do You Close Your Eyes,” the album’s shortest song that ends Side A, is perhaps the least mentioned track from this album among fans, yet I still find it a pure corker, an overlooked gem.

Aside from all this, I can say nothing detailed or profound about this album’s impact on both the industry or countless other musicians or groups in the genre that hasn’t already been stated thousands of times through the decades, so I’ll simply repeat the two words I hear most often regarding this release, and words in which I completely agree—”Sheer Brilliance!”

(And special kudos to Ken Kelly for creating the stunning artwork, which has to be one of the best album covers of all time.)