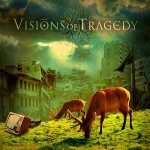 Back in 2012, the Spanish group Visions Of Tragedy released its self-titled debut album. Although containing only three tracks, and clocking in at just over thirty-two minutes in length, the music is highly impressive Prog-Metal in the same neighborhood as Circus Maximus, Symphony X, Andromeda, Vanden Plas, Altura, Mindwarp Chamber, Dream Theater, etc.

Here you’ll find not only excellent musicianship, but clean, crisp, and top-notch vocals also, along with grand and elaborate song arrangements with creative rhythms, and instrumentation featuring both electronic and acoustic guitar and a wide variety of keyboards and synths, all wrapped up in a slickly produced package.

Now I’m just praying Visions Of Tragedy releases more high-caliber material in the near future, although I believe the band is currently hunting for another record label—but with the talent displayed on this debut, I can’t imagine the band having any difficulty finding a label who’ll back them!