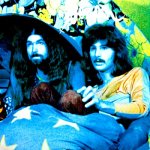 Although originally from Texas, the obscure band once known as Bubble Puppy (yes, a silly name) moved to California and rechristened itself Demian, altered its style from mostly Psychedelic Rock to a gruffer and gutsier more Hard Rock/Blues Rock sound with Heavy Psych elements, and created one terrific album before disbanding and falling once again into obscurity.

On this release, mega-tasty guitars abound, with Demian’s sound/style being often comparable to other guitar-oriented groups from the early ’70s, such as Three Man Army, Fuzzy Duck, Josefus, Steamhammer, Wishbone Ash, and Mountain.

Unfortunately, this album is also difficult to locate, but it’s definitely worth the hunt.