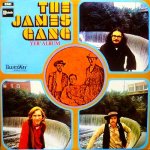 The debut album from James Gang is perhaps best remembered for being the platter that brought guitarist Joe Walsh and his instantly recognizable voice to the attention of Hard Rock audiences.

Maybe not as focused as the band’s future releases due to the diversity of musical styles included, with the performances occasionally a tad “loose” and some short, silly, and irritating “studio” bits breaking up the flow, Yer’ Album does contain a slew of enjoyable material nonetheless, such as the songs “Take a Look Around,” “Lost Woman,” “Collage,” and the rollicking “Funk #48.”

Although it’s not my favorite overall collection of tracks from James Gang (I actually prefer the albums during the “Tommy Bolin era” half a decade later), this release is still considered a Hard Rock classic by many, and rightfully so.