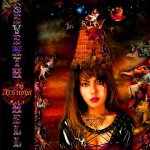 Imagine a band with the Progressive-Metal prowess of Dream Theater, the Jazz-Fusion inspiration of a more modern Return To Forever, and the complicated and bizarre noodling of a heavier Symphonic Prog outfit with Gentle Giant’s Avant-Garde tendencies all thrown together into the mix and that’s what you’ll get with Ars Nova (also known as Mani-Houjyu), a unique all-female Progressive Rock act from Tokyo with some (albeit sparse) off-the-wall vocals to add texture and melody to the package.

I love this band, due to its overall “bizarreness,” and appreciate the handful of offerings I’ve heard thus far. The female singer is so damned unique, while the instrumentation and song arrangements on this album provide an often wild experience—matching the strange cover art—especially on the opening title track and the closing seventeen-minute, musical-roller-coaster-ride epic “Salvador Syndrome.”

Despite the album’s title, Seventh Hell is actually the band’s ninth studio release, but because it was issued back in 2009, and the group had previously released a new album every few years since 1992, I strongly fear Ars Nova has disbanded. If so, it’s a crying shame.