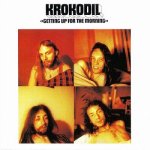 Although formed in Switzerland, the obscure band Krokodil often got lumped into the Krautrock category of music, and on several of the band’s releases, it’s easy to see why. Sure, Krokodil focused mainly on Heavy Psych and Blues Rock, but it also tossed hints of Progressive Rock and Folk Rock with some fun experimentation into many of its tracks, using everything from harmonica and flute to Mellotron and synths, and therefore ended up being a nice cross between U.K. and German bands of the same era.

Despite the truly lame album cover—”pretty boys” is hardly a term that springs to mind for these guys, huh?—Getting Up for the Morning (the band’s fourth studio release) is quite enjoyable overall, especially for lovers of tasty, bluesy, trippy guitar from one of the most exciting periods in rock ‘n’ roll history.