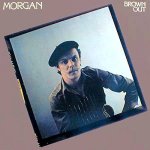 I eagerly purchased the two albums by this U.K. band back in the late ’70s based solely on my love for Morgan Fisher’s keyboard work in Mott The Hoople (and Mott) and expected a similar style of music.

So imagine my surprise when I got the albums home and discovered the music on both the debut album (1972’s Nova Solis) and Brown Out was actually Progressive Rock not unlike Yes and ELP, or King Crimson and Van Der Graaf Generator, with even touches of Gentle Giant and Zappa, and nothing at all within the same rock ‘n’ roll universe as Mott The Hoople.

Anyway, as on Morgan’s debut album, the music on Brown Out is quite good, excellent at times, with Morgan Fisher’s multi-keyboards dominating the proceedings and backed by a tight, creative rhythm section made up of bassist Bob Sapsed and drummer Maurice Bacon. Indeed, the impressive keyboard noodling pushed Morgan Fisher into the same league as Rick Wakeman, Patrick Moraz, and Keith Emerson for me.

But I have to admit, I was never fond of the band’s vocalist—Tim Staffell (the original singer of Smile, which would become Queen) has a tone, vibrato, and delivery style that simply annoys the heck out of me, therefore, despite my fondness for the keyboard performances and the experimentation of the material, I couldn’t bring myself to rate either album higher than just about average.

So thank goodness for some of the lengthier instrumental passages, since the musicianship on Brown Out is well above average, the songs often fascinating (especially the track “What Is – Is What,” a twenty-minute epic that encompasses all of Side B) and is worth investigation for fans of Progressive Rock who are unfamiliar with this obscure band.

By the way, I learned many years later that this sophomore record was not released back in 1973 as originally planned due to a rift between the band and RCA Records, but was shelved for several years until another label released it. Also note, for those who may decide to hunt down this album, it was also reissued with the title The Sleeper Wakes (with one version of the cover looking similar to that shown here, as well as a completely different cover for the CD version).