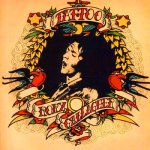 I always had a special place in my heart for the late Rory Gallagher. Although I was never a huge fan of his characteristic “talk/singing” vocals, I could easily tolerate them since I greatly admired his guitar skills. Plus his songwriting talent and the often-superb instrumentation on his songs made for some truly enjoyable albums.

For some reason, when it came to his solo releases such as Tattoo, his bluesy yet occasionally jazzy guitar playing usually reminded me of a cross between Kim Simmonds (Savoy Brown) and Tommy Bolin (Deep Purple/James Gang), although with his own special sound, almost a marriage between the styles of the other two guitarists.

And it’s a crying shame that, like the other guitarists, he also never got the recognition he deserved, never became a household name. So when it comes to Rory’s work, it’s good stuff overall, especially this album, with tracks such as “Sleep on a Clothes-Line,” “Tattoo’d Lady,” “Livin’ Like A Trucker,” “20:20 Vision,” “Admit It,” and “Cradle Rock” all showcasing Gallagher’s flavorful guitar in a wide variety of styles, and is perhaps my favorite of his many releases during the ’70s!