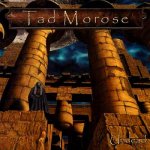 To me, this enduring Swedish band always seemed a blending of classic groups such as Black Sabbath and Judas Priest, typically producing music with wicked guitar tones and sinister keyboard moods, and as the title of this album alone suggests, Undead is no exception.

Indeed, this release is pure Tad Morose, featuring some of the band’s most devilish riffs and desperately urgent vocals, as well as some of its darkest/doomiest atmospheres, which, along with the group’s Progressive Metal tendencies, gives Tad Morose an easily identifiable stamp.

With tracks such as “Order of the Seven Poles,” “The Dead and His Son,” “Servant of the Bones,” “Lord on High,” and “No Wings to Burn” included, Undead, the band’s fourth studio album, is metal mayhem at its finest, and one of the reasons I originally zeroed in on Tad Morose to become a long-lasting fan.