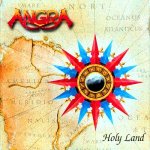 In my opinion, Angra’s strength stemmed from not only featuring a stellar line-up of musicians—including the highly gifted, soaring, and recognizable Andre Matos on lead vocals—but also merging into its overall Symphonic/Prog-Rock and Metal style the band’s Brazilian musical roots/cultural influences. So when the band incorporated different “Santana-like” percussion, along with acoustic and wind instruments into its songs, and added that Brazilian tang to its rhythms and melodies, it truly set Angra apart from the majority of its contemporaries within the genre. This is what made Angra’s earlier albums (especially Holy Land) quite special.

Therefore, it’s a shame that, as the years passed and each new album emerged, the band slowly seemed to shy away from adding these particular elements, thus eventually diminishing much of Angra’s signature uniqueness.

Be that as it may, Holy Land, Angra’s second studio release, is probably one of my favorites by the band, with forceful Power Metal riffage on songs such as “Z.I.T.O.” and “Nothing to Say,” sweeping Prog-Rock balladry on “Make Believe” and “Deep Blue,” while many of my favorites, such as the title track along with “Carolina IV,” “The Shaman,” and “Silence and Distance,” wedded a hodgepodge of musical styles, with much of the Brazilian influences brilliantly emerging and enriching the pageantry of it all.

Nowadays, although I still enjoy Angra, finding each of its albums generally better than average within the genre, it’s not with quite the same high level of enthusiasm I felt during the band’s early days when Andre Matos still wielded the microphone and the South American flavor proved spicier.